The ANA Has The Wrong Read on New TLDs

I’ve been watching the dialogue at the ANA and other large advertising associations with dismay.

With all due respect, the ANA is reminding me of journalism professionals who don’t want to let go of their past to embrace the online world (I’m not speaking of all journalists, but of those who don’t/can’t accept change). For example, newspapers may be losing advertisers to the Internet, but rather than complaining and commiserating, they should be embracing online video which is taking advertisers from television and cable. Advertisers aren’t disappearing, they are just migrating to systems that get them better results. There are always opportunities in change if we think clearly about them!

The point is this… I don’t think the ANA can stop this round of new TLDs.

So the ANA would do their members better by quickly focusing on the opportunities rather than the difficulties. In fact, companies that are not studying this closely right now are almost already too late. Experts suggest that if a company/organization wants the best chance of acquiring their own TLD, they will need to have their application in by the beginning of the deadline in January, rather than waiting till April.

Why, you ask?  Because, although ICANN has been very thorough in their Policy Development Process, there are indications that “who applies first” can become “a” factor. ICANN has reserved the ability to make changes in the process and may not have accounted for every possible scenario.

The timing of your application may very well matter. And that doesn’t include all the time necessary to prepare the application itself; a significant matter.

—
(Update from Joe: After I wrote this post, it was reported that there will be no advantage to file early – http://domainincite.com/new-gtlds-no-advantage-to-applying-early/ – however, even in ICANN’s TLD Application System (TAS) they state that applicants should apply way before the deadline… 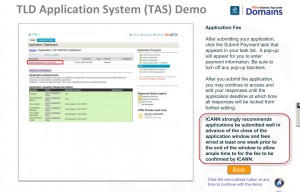 I suspect that 1.) some of the objectors and 2.) those companies who are most silent about new TLDs right now (and there are many) will be the first to apply; they have an interest in limiting the competition. I’m not suggesting this is the ANA’s motivation, just that they could serve their members better by focusing on the opportunities while there’s still some time.

I think large brands have a tremendous opportunity. It’s too bad there isn’t much time and the ANA isn’t helping them to understand the opportunities this can bring.

Joe Alagna is an independent insurance broker offering home, car and business insurance in southern California. Before that he was an international expert in all aspects of the domain name business, including domain name investing, new gTLDs, registrars, and registries. He also negotiated national accounts contracts for AT&T Wireless. Joe can be reached by phone at +1 (909) 606-9175 or via email using the contact form on this site.
View all posts by Joe Alagna →
This entry was posted in ICANN, New Top Level Domains. Bookmark the permalink.