ICANN announced today that since they received over 500 applications they are triggering the use of “Digital Archery” as part of the batching of applications. The last report I saw stated that there were 839 applicants.

It had been stated that they weren’t going to use a first come, first served method and also that they didn’t want for it to be a lottery of any kind. 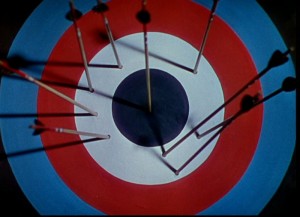 I had been struggling for some time to understand why what they were going to do. Now that things have played out I can see some of the reasons they didn’t want to do those things. If it were first come, first served, there wouldn’t have been a fair way to deal with same string applications that came in later. If it had been a pick from the hat, it could have been judged an illegal lottery. Both of those methods have problems.

To put it as simply as possible, this method first gives applicants a way to opt out of the digital archery method if time isn’t important to them. Then involves having the remaining applicants participate in process where they…

The differences in time they picked and the time they pinged the server to match that initial pick (regardless of before or after) are then compared and ranked. Then any matching strings are grouped with the winners regardless of how they did in the competition so they can be judged together. There is also a locational element to make it fair for applicants from around the globe.

You may review the announcement here:

This makes it clearer…

I can’t believe it! It’s really like playing darts (at least part of it)!

Here is a quote directly from the ICANN announcement:

Joe Alagna is an independent insurance broker offering home, car and business insurance in southern California. Before that he was an international expert in all aspects of the domain name business, including domain name investing, new gTLDs, registrars, and registries. He also negotiated national accounts contracts for AT&T Wireless. Joe can be reached by phone at +1 (909) 606-9175 or via email using the contact form on this site.
View all posts by Joe Alagna →
This entry was posted in Domain Name News, Domain Names, ICANN, New Top Level Domains, Registries. Bookmark the permalink.