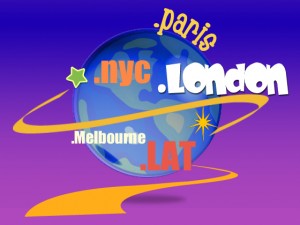 We’re only two days away from seeing an open window for new Top Level Domain (TLD) applications. So expect a lot of press over the next week, but don’t expect many answers about who is applying and what new TLDs they are applying for. Most corporations don’t want anyone to know that they are applying and those who are doing it as an investment don’t want any competition. After all, why invite competitive bidders? News of who applied and what they applied for will come from ICANN after the window closes on April 12th.

Many of those that are being public about their applications are government entities and that is because the program won’t allow a new TLD naming a city or most other government place names to occur without that government’s blessing; no worries about competition there! An article came out today pointing out that a good portion of new TLD applicants are governments or those representing city and place names.

Some of the greatest interest in the slate of new top-level Internet domain names set to be opened up Thursday has come from governments, the chief executive of the non-profit body that will oversee those new domains said…

ICANN To Expand Domain Despite Web Of Protest

The non-profit organisation that oversees internet domain names has said it will go ahead with plans to create several hundred new suffixes to rival .com and .net from January 12, despite intense pressure from big companies and US lawmakers to delay or limit the programme…

From Application To Use: How The Internet Will Get New Domain Name Suffixes

On Thursday, the Internet Corporation for Assigned Names and Numbers will start accepting applications for new Internet address suffixes. They could represent hobbies, ethnic groups, corporate brand names and more…

Web-Domain Plan Launches This Week — Are You Prepared?
What to Know as ICANN Opens Application Process

Despite heavy opposition from some members of Congress and the Association of National Advertisers, among others, the Internet Corp. for Assigned Names and Numbers on Jan. 12 will begin accepting applications from businesses and other groups to create and operate pieces of internet infrastructure known as generic top-level domains, or gTLDs…

Joe Alagna is an independent insurance broker offering home, car and business insurance in southern California. Before that he was an international expert in all aspects of the domain name business, including domain name investing, new gTLDs, registrars, and registries. He also negotiated national accounts contracts for AT&T Wireless. Joe can be reached by phone at +1 (909) 606-9175 or via email using the contact form on this site.
View all posts by Joe Alagna →
This entry was posted in Domain Name News, Domain Names, ICANN, New Top Level Domains. Bookmark the permalink.