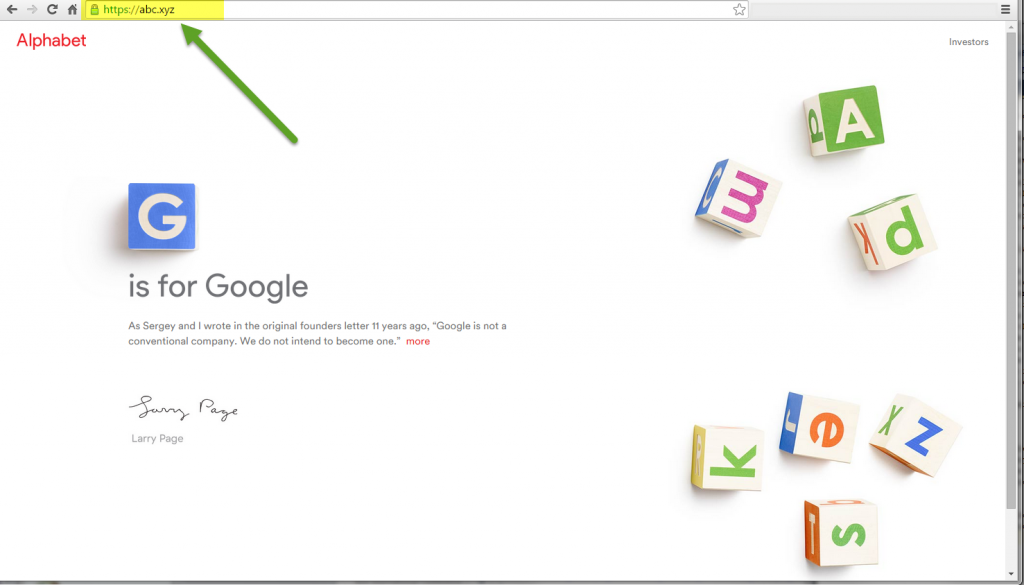 Google made a big announcement today that will certainly benefit the world of new generic Top Level Domains (gTLDs). They have started a new holding company called “Alphabet” and are hosting it at ABC.xyz. The new .xyz domain name was started by Daniel Negari, a Beverly Hills domain name entrepreneur (He does a lot of other stuff too). Daniel’s marketing of the new .xyz domain name has had its critics but overall, has been ingenious. He has done several amazing things:

– leveraged contacts from his large affiliate business (likely including Google)
– positioned .xyz to be thought of as the largest new gTLD in the space (This was accomplished mostly through a controversial special arrangement with Web.com but certainly helped to accomplish its purpose
– used his existing .com domain (xyz.com) to allow .xyz registrants to be secure that their users wouldn’t be redirected accidentally to .com domains. To see what I mean, type in abc.xyz.com. You’ll see that it still goes to the abc.xyz domain name. Very few new gTLD applicants thought of this and it is very smart.
– leveraged the news media to get as much publicity as possible for his new gTLD.
– positioned .xyz as the domain name for millennials as in generation xzy.

There are a few other things they have done very well to have taken a string that many considered not all that great to become one of the most successful new gTLDs in the world. Getting Google on board with ABC.XYZ is a huge win.

Whatever you think of the new domain ending, .xyz, anyone could learn a lot about marketing by studying what .xyz is doing to make it a commercial success.

Joe Alagna is an independent insurance broker offering home, car and business insurance in southern California. Before that he was an international expert in all aspects of the domain name business, including domain name investing, new gTLDs, registrars, and registries. He also negotiated national accounts contracts for AT&T Wireless. Joe can be reached by phone at +1 (909) 606-9175 or via email using the contact form on this site.
View all posts by Joe Alagna →
This entry was posted in Domain Name News, Domain Names, New gTld Auctions, New Top Level Domains, Plain Interesting. Bookmark the permalink.